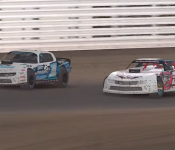 Johnny Ratley with the Dirt Panda race team started 2nd in the feature behind his teammate William Hargreaves, but wasted no time getting to the front in the first few laps and held off the likes of Hargreaves, Jim Reavis, Brandyn Proudfoot, and Billy Northcutt for the remainder of the 40 lap Bootleg Racing League Dirt Street Stock event at Knoxville Raceway and came home with a hard earned checkered flag.

After a surprising upset with Proudfoot and Hargreaves being involved in an incident on lap 28 that sent them both to the back of the field, the points standings have closed up with only an 8 point gap between the current top three of Proudfoot, Northcutt, and Ratley.

“I was just trying to hold it and just stay in front of him.”, Ratley commented about battling Reavis across the finish line, “We were beating and banging so much and the last few laps Billy (Northcutt) was catching up with us. I didn’t know if he was going to catch us and pass us.”