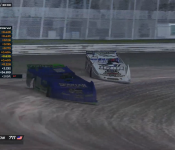 Blake Chapman with Vanderpool Racing took the win at the A&J Custom Creations 305 Sprint Series with the Coast 2 Coast Racing League Hometown Heroes Series 20 lap feature event around Volusia Speedway Park beating out Randy Shreves and Donovan Ross. Lane Snook and Brad Vickrey both ended their evenings early after unfortunate incidents. Chapman, winning in this series two weeks in a row, told us “I think I found a pretty fast line here. It worked for me last week, it worked for me in the matinee today and I stuck to it all night tonight and it seemed to work out just fine for me.”

Lane Snook with BandyBuilt took the checkered flag in the Racing iCON Sim Sports 360 Sprints Series 25 lap event ahead of Randy Shreves and Blake Chapman. Snook seemed struggle early on qualifying in 19th and yet was able to get the win for the second week in a row for this series. “Tacky tracks are not my racing style at all and I’m a lot better on a slick race track.”, Snook told us as to how he was able to take the lead from Chapman with only three laps remaining and pull away from the field.

Nick Vickrey took home the win for the final event of the night in the Pro Late Model Series 30 lap event ahead of Carson Nichelson and Kurt Shatzer after an intense battle for the lead. A surprise upset on lap 13 involving Field Miller, Andy Piercefield, and Patrick Spangler, who were running 2nd,3rd, and 5th respectively, taking all three drivers out of contention for the lead and giving Vickrey, who was in 4th, the opportunity that he needed to battle Nichelson directly for the win.