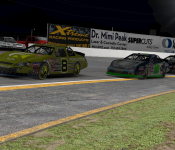 Mathew Thunhorst showed his skill around Langley Speedway as he led every lap to his first win of the season in the Bootleg Racing League Grand National Series 100 lap event holding off J R Shepherd and Kenny Kibbey. A late race caution forced a three-lap shootout and Shepherd was able to take advantage of the restart to get 2nd place away from Kibbey, who had held it up to that point. “Just got lucky that the caution came out when it did and there were just a few laps in the end and I got a good restart.”, Shepherd commented about getting around Kibbey.

With his first season win under his belt, Thunhorst now sets his sights to Five Flags Speedway for next week. “It’s one of those places that feels pretty good. I know [Kibbey’s] going to be starting in front of me there… I know he’s going to be pretty strong there.” Thunhorst, a strong driver each week, knows the competition is going to be tough, “You hope things go good, but you still have to prove it week in and week out and a lot of these guys are pretty strong. So, we’ll just have to see how it plays out.”

Shepherd is still holding onto the lead in the point standings with two wins and a total of 119 points after the first three races. Thunhorst trails behind Shepherd by only 1 point after his win tonight and Kibbey holds onto 3rd place 5 points off the lead. Justin Morton and Austin Boelke are still 4th and 5th in the standings with 110 and 108 points respectively, both drivers still very much in contention for the championship battle themselves.