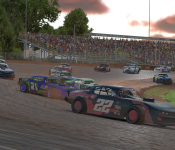 Brandyn Proudfoot of Jim Beaver eSports takes his second win of the season tonight in the Bootleg Racing League Dirt Street Stock Series at Lernerville Speedway beating Lon Franks and William Hargreaves to the line. Hargreaves struggled as he was caught out of the preferred line on restarts and wasn’t able to battle with Proudfoot often, while Proudfoot was forced to drive defensively to hold off Franks at the end.

Proudfoot ran the top through the majority of the race but decided to change it up at the end. “I didn’t have the tires really to run the bottom because I stayed on the top real hard”, Proudfoot commented as he started running a slider line through turns one and two while the rest of the field ran high or mid lines around track. “A little bit of a defense, but also that’s where I thought the line was going there at the end.” Being able to read the track is a strong advantage that Proudfoot exploits each week for sure.

The season is now officially half completed, and Proudfoot takes the lead back from Hargreaves with 448 points over Hargreaves’ 437 points. Billy Northcutt, who didn’t compete tonight, still holds onto 3rd place with 341 points, but may be too far behind at this point in the season to battle for the championship without a serious upset for the two leading drivers. Proudfoot and Hargreaves head into the seventh round being the only drivers to have multiple wins so far this season.