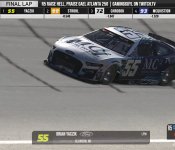 Brian Yaczik with Loud Pedal Motorsports took the checkered flag in the Raise Hell, Praise Gael Atlanta 250 presented by GamingGuyL on Twitch.tv with the Pretty Good Racing League at Atlanta Motor Speedway ahead of Michael Strohl and Michael Chrobok. “Sometimes it’s better to be lucky than good”, Yaczik quoted Richard Petty as he talked with us after his win, “Rasimas was running me down and I think he was bringing Strohl with him and Ward was there. So, it was going to get ugly for me really fast but somehow someway we kept the #55 on the sharp end of the field.”

Steve Haring led the field to start off the night, but Woody Mahan had the better launch off the green from the outside and quickly took the lead away. The first 10 laps of the race already showed a lot of shuffling of positions as faster drivers were overtaking the rest of field in a hard charge to the front. The biggest movers were Drew Carroll up to 3rd from 15th, Brian Yaczik up to 6th from 17th, Chad Mikosz up to 10th from 21st, and Mike Rasimas up to 12th from 23rd. The drivers were making up as much ground as possible in the early stages to be sure to be in position to contest for the lead in the end.

Carroll caught up to Mahan and made an aggressive move to take away the lead on lap 25. Rasimas was running in 7th as the field began lap 30 and was consistently out pacing the leaders lap after lap quickly closing the 1 second gap on Kevin Stone ahead of him and walking away from Jeff Ward in 8th place with a gap of over 3 seconds. Yaczik reached the front pack and started pressuring Danny Gutierrez for 2nd place but wasn’t able to complete the pass and settled into 3rd ahead of Travis McQuistion. The biggest mover of the race at that point of Tommy Rhyne running in 15th place up 21 positions.

Carroll led the first pit stop under green on lap 46 followed by several other drivers but received a speeding penalty losing all of the progress he had made to that point. Norm Pelletier made his stop on lap 49 but made contact with Michael Whiting who was sideways in the pit entrance after catching the grass giving Pelletier severe damage to the front of his car. Ward was in the lead after the majority of drivers had completed their pit cycles and rejoined the track with Gutierrez in 2nd followed by Thomas George and Mike Rasimas. Rhyne continued to jump positions quickly running in 10th up 26 spots from the start of the race. Yaczik, running in 5th, was one of the last drivers to pit waiting until lap 50 to go in giving him a slight advantage over the leaders.

Rasimas caught up to Ward and pressured for the lead over several laps before taking the position away from Ward on lap 79 using lap traffic to his advantage. As the field crossed the halfway point in the race, Yaczik was up to 4th running 4 seconds behind the leader but had seemed to struggle falling off his earlier pace not gaining any ground on Gutierrez ahead of him in 3rd. The lead lap consisted of the top 16 drivers with Don Runkle Jr being the first driver a lap down as the race stayed under green with the second round of pit stops approaching.

Lap 93 started off the pit cycles with the lead lap cars in smaller groups than before as drivers tried to get the most out of their different pit strategies. Yaczik came down pit road on lap 96 with Rasimas going in on the next lap. Ward reclaimed the lead after his stop and had a comfortable lead over Rasimas who rejoined in 2nd ahead of George. Scott Eckrich, who was running in 15th with Drew Carroll pressuring from behind, had contact while negotiating through lap traffic on lap 105 and dropped back a few positions leaving his car with significant damage. All drivers involved were able to recover and continued running as the race stayed under green.

Drivers started going through the third pit cycle on lap 131 under green conditions. George and Yaczik stayed out on track much longer with George pitting with 23 laps remaining and Yaczik going in on the following lap. This late move gave the lead back over to Rasimas now with a 3 second gap over Ward, who was 8 seconds ahead of Strohl in 3rd as the race had 20 laps to go. The first caution came out with 19 laps remaining when Josh Biddle found himself sideways going through turns one and two collecting another car.

As the field restacked the lead lap consisted of only the top 9 drivers. Rasimas and Ward choose to pit again while Yaczik stayed out and took the lead. The green flag came back out with Yaczik getting a good launch clearing Ward quickly. Rasimas made an aggressive move over Ward but contact with the outside wall brought the pack together as 3rd through 9th battled hard letting Yaczik pull away. Rasimas collected his car back up and went to work closing the gap to the front with only 10 laps to go.

Another caution came out with 9 laps to go when Tyler Dulgar made contact with the wall and Django Matthews had nowhere to go getting caught up behind him. Several lead lap drivers decided to pit again including Rasimas and Ward. Yaczik again stayed out now followed by Strohl, Mikosz, and Chrobok. The restart with 4 laps to go had a serious upset for many drivers as Mikosz spun his tires off the launch and spun around into traffic causing a large pile up collecting many other drivers in the field to include Rasimas ending the night with Brian Yaczik taking the checkered flag under caution.

Mike Rasimas and Michael Strohl are now tied for the lead in the points standings, both drivers with 191 points. Scott Eckrich sits in 3rd only 15 points behind the leaders. Brian Yaczik jumps up to 4th after tonight’s win with 156 points with Rich Jette in 5th only 2 points behind him. The Pretty Good Racing League now heads over to Circuit of the Americas for the CPC Productions 120 presented by Graafix eSports in the first road course event of the season broadcast live on March 22nd at 8:50PM ET only on the Virtual Grip Network! We’ve heard it’s going to be “pretty good”.