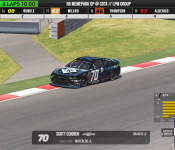 Scott Eckrich with Graafix LC Motorsports claimed his third win of the season tonight in the MemePark Grand Prix at COTA presented by the LPM Group with the Pretty Good Racing League at Circuit of the Americas ahead of Mike Rasimas and Jeff Ward. “Road courses in general seem to suit me pretty well but especially technical road courses”, Eckrich commented after his dominating win tonight, “With this new car as finicky as it is it really, really puts it extremely in the driver’s hands… to say it’s a nightmare to control this thing is an understatement.”

Fred Thompson started the night off on the pole for the first road course of the season. “It’s exciting, that’s for darn sure”, Thompson told us before the race. The drivers knew that pit strategies would be critical for the race and Thompson planned to keep it simple, “When the [crew chief] says come in, I’m coming in.” Norm Pelletier started to Thompson’s outside on the front row as the green flag came out over the drivers. Pelletier had a strong launch taking the lead off the start.

Pelletier got out of shape spinning coming out of a corner and quickly fell back in the field as many drivers were struggling to complete the first lap without incident. Dupre was the leader going into the second lap with Thomas George putting pressure on him. Scott Eckrich was running in 6th when he almost had his night ended early ass Django Matthews spun around in front of Eckrich forcing Eckrich off track wide around a corner to avoid. Eckrich was able to recover quickly and continue without losing much pace as he found his way up to 3rd place with Jeff Ward following close behind.

Mike Rasimas found himself in the lead as more drivers had problems getting around the course with frequent spins and slide offs throughout the field that kept the running order shuffling as the field went into the 5th lap of the evening. Jeff Ward and Scott Eckrich each got around Drew Carroll in 2nd place putting him back in 4th while Mike Rasimas continued to lead the field. Ward and Eckrich quickly closed the gap to Rasimas as they battled each other over 2nd with Eckrich coming away with the position over Ward going into the 10th lap.

Scott Eckrich took the lead from Mike Rasimas on lap 10 and started to pull away showing a strong pace. All of the top 10 drivers made their pit stops with 18 laps remaining in the 35-lap event essentially splitting the race in half with fuel. Scott Eckrich held the lead followed by Mike Rasimas and Jeff Ward as the field completed their pit cycles with 16 laps left. Eckrich was out pacing every driver on track lap after lap with the top 3 drivers completely separated from the rest of the field by over 25 seconds.

Going into the final 10 laps of the race, Scott Eckrich had built up an over 20 second lead over Mike Rasimas in 2nd place. Jeff Ward had run into some trouble a few laps prior and was running in 3rd place 30 seconds behind Eckrich. Thomas George, Drew Carroll, and Woody Mahan battled hard over 4th place over 50 seconds behind the leader. The top 11 drivers were still on the lead lap with Fred Thompson being the last lead lap car and only 19 cars were still running on track out of the 24-car field.

Scott Eckrich absolutely dominated the field crossing the finish line 31 seconds ahead of Mike Rasimas in 2nd place and 57 seconds ahead of Jeff Ward in 3rd. Eckrich started in 13th tonight and, after taking the lead on lap 10, held it for the remainder of the 35-lap event. Only the top 10 drivers were still on the lead lap with Isaiah Dupre being the last lead lap car tonight. Travis McQuistion finished last in 24th place giving him the pole position next week at Richmond Raceway as the field inverts.

Mike Rasimas leads in the point standings with 231 points with Scott Eckrich now behind by only 2 points. Michael Strohl moves back to 3rd place with 191 points. Brian Yaczik holds onto 4th at 190 points and Thomas George sits close behind with 185 points to round out the top 5 drivers. Next week, the Pretty Good Racing League moves over to Richmond Raceway for 200 laps of action in the Muscular Dystrophy Awareness 200 on March 29th broadcast live at 8:50PM EDT only on the Virtual Grip Network! We’ve heard it’s going to be “pretty good”.