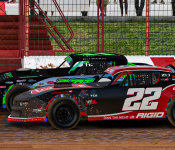 Billy Northcutt with Dirt Panda took the checkered flag tonight in the Bootleg Racing League Dirt Street Stock Series at Lanier National Speedway ahead of Brandyn Proudfoot and Johnny Ratley. “That right there, that’s how it’s done.”, Northcutt commented as the exciting night came to a close, “[Proudfoot] got up beside me and I was pinching him down quite a bit, giving him barely enough room to race me clean and he still did. I mean, so that says a lot.”

Billy Northcutt jumped to the top of the timing board with a fast lap at 16.256 in qualifying to start the night off strong. Northcutt held off Brandyn Proudfoot in the first heat to take the win while Johnny Ratley led every lap to the checkered flag in the second heat event and Zachary Loomis took the third and final heat win of the night. Northcutt and Ratley shared the front row of the 18-car field as the drivers lined up on track for the 40-lap feature event ahead of Loomis and Proudfoot.

Northcutt held the lead off the start as Ratley, Proudfoot and Loomis went three wide over 2nd place going around the first lap. Loomis was the first to back off as Proudfoot and Ratley continued to battle side by side with Proudfoot holding the inside line. The battle gave Northcutt an opportunity to pull away with the lead slightly before Ratley cleared ahead of Proudfoot. J R Shepherd got to the inside of Loomis challenging for 4th place as the field put the first 10 laps behind them.

Northcutt continued to control the field as Ratley struggled to close up on the leader. William Hargreaves was quietly moving up through the field, up 5 spots into 6th place and reeling Shepherd in ahead. Proudfoot stayed within a car length behind Ratley who was falling off the pace of Northcutt as the first caution came out on lap 17 bringing the drivers back together and undoing Northcutt’s gap ahead. Northcutt again jumped out ahead of the field as racing resumed and Ratley was again battling side by side with Proudfoot for 2nd place.

Hargreaves was up to 4th and got his nose into the battle between Proudfoot and Ratley allowing Proudfoot to clear in 2nd as Ratley found himself fighting Hargreaves for 3rd. Proudfoot was quickly cutting down the gap that Northcutt had over the field closing in on his rear bump with 15 laps remaining. Hargreaves and Ratley were still running side by side over 3rd as the battle for the lead ran away from them and Loomis was battling to the outside of Shepherd for 5th.

Proudfoot was aggressively looking for an opening around Northcutt in the lead going into the final 10 laps of the night. Ratley cleared Hargreaves briefly just for Hargreaves to send his car back beneath him to challenge for 3rd again with Shepherd securely holding 5th place. Proudfoot got to the inside of Northcutt going into the last laps, but momentum was favoring Northcutt coming out of the corners. The two drivers came out of the final corner side by side with Billy Northcutt taking the checkered flag ahead of Brandyn Proudfoot by 0.023 at the line with Johnny Ratley, J R Shepherd, and William Hargreaves rounding out the top 5 finishers tonight at Lanier National Speedway.

Brandyn Proudfoot now has a commanding lead in the point standings with 616 points as the season championship. Billy Northcutt moves up to 2nd place after tonight’s win with 539 points with William Hargreaves close behind in 3rd with 531 points. J R Shepherd holds onto 4th place with 471 points as Jeffrey Hardin sits in 5th with 451 points. The drivers of the Bootleg Racing League Dirt Street Stock Series now head to The Dirt Track at Charlotte for race 9 of season 12 on August 19th with all of the dirt slinging action broadcast live at 7:10PM ET exclusively on the Virtual Grip Network!