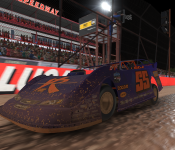 Stephen Spies with Gambler Motorsports took the checkered flag tonight in the Bootleg Racing League Dirt Super Late Model Series presented by Whiteriver LLC at Lucas Oil Speedway ahead of Brandyn Proudfoot and Aiden Young. “Once we finally got rolling there that actually was a lot of fun”, Spies shared with us as the night came to a close after running a perfect race, “I really like this track and it just felt real comfortable in the setup and it just was rolling, it felt easy.”

Stephen Spies with Gambler Motorsports stood atop the timing and scoring boards in qualifying setting a 4-lap average of 14.389 beating Bradlee Means in 2nd place by over 0.1 seconds. Spies went on to lead every lap in the first heat and take the win ahead of William Hargreaves. Bradlee Means and Brandyn Proudfoot took the remaining heat wins. James Ray and Billy Northcutt took their respectively consolation race wins leading up to the 30-lap feature event.

Spies led the 20-car field around to take the green flag with Means to his inside. Spies got a great jump off the start but further back in the field other drivers struggled as several drivers came together sending Proudfoot into the outside wall and bringing out an early caution. Spies got another good jump off the restart, but again the field struggled sending Hargreaves around immediately bringing out another caution. After more failed restarts, Spies was able to get another good jump off the start going into lap 5 with Proudfoot following him along the top side into 2nd place.

Proudfoot immediately went for the lead along with Aiden Young going 3 wide. Spies reclaimed the lead as Proudfoot and Young continued to battle over 2nd place with another caution halting the action with 10 laps completed and leading into more failed restarts with the a few drivers mistiming the jump and collecting several others. Spies took the green going into lap 11 with Proudfoot and Young continuing their battle for 2nd. Spies took advantage of the situation to pull away from the field by over 0.7 seconds going into the 2nd half of the evening.

Hargreaves was defending against Matt Durbin for 4th place while Proudfoot and Young extended their gap ahead of the rest of the field to over 2 seconds as Spies caught lap traffic for the first time in the night. Spies was forced to checkup for a lap car allowing Proudfoot and Young to quickly close on him and Proudfoot dove low to take the lead as the caution came out placing him back in 2nd place for the single file restart with 9 laps remaining. Spies was under immediate pressure from both Proudfoot and Young off the restart.

Proudfoot made a minor mistake along the outside line allowing Spies to pull away as Young continued to challenge for 2nd place. Young repeatedly tried to make something happen on the bottom of the track but couldn’t match Proudfoot’s momentum coming out of the corners as the laps quickly counted down. Stephen Spies extended his lead out to over 1 second to take the checkered flag tonight with Brandyn Proudfoot, Aiden Young, Bradlee Means, and William Hargreaves rounding out the top 5 at Lucas Oil Speedway.

Stephen Spies take control of the lead in the point standings with 158 points over William Hargreaves in 2nd place 8 points behind. Aiden Young sits in 3rd place with 148 points with Matt Durbin and Jeff Sharp rounding out the top 5 drivers going into the 3rd round of the season. The Bootleg Racing League next heads to Cedar Lake Speedway on January 20th with all of the dirt slinging action brought to you live at 8:40PM ET only on the Virtual Grip Network!