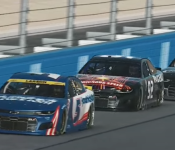 As the 2021 season comes to a close for the GUNR4sR (Guys Using NASCAR Rules for Sim Racing) Racing League at Phoenix Raceway, Nicholas Snyder of Nick Snyder Motorsports claims the checkered flag as well as the season championship after a dominating performance ahead of Brad Lane and Brandon Shirley. Rich Reimuller finished in 4th with Chris Gilbert rounding out the top 5. Adam Monts De Oca, who was also a playoff driver, finished in 9th after a risky pit strategy did not pay off for him in the end.

“I kind of thought I gave it away when I didn’t take tires the first stop and was just too far behind the traffic when we were all on equal tires.”, Snyder commented on dropping back to the middle of the field after not taking new tires during an early caution on lap 15 and finishing the 40 lap stage in 6th. Different pit strategies were emerging as the race went on with many drivers choosing to pit under green for fuel late in the race.

“That first run was trying to just make it to the end of stage one and then we had that short fifteen lap run.” Snyder’s winning pit strategy was based around quick planning and reacting to the rest of the field, “When I saw the top 2 didn’t come in I figured I’d just do the opposite of them and it really played out because that last caution didn’t come out and I was five to the good (laps left of fuel) so I wouldn’t have to pit and I think Brad (Lane) and I were the only ones that were gonna make it.”