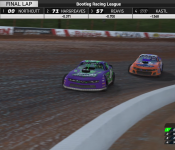 Billy Northcutt with the Dirt Panda Racing Team dominated the field tonight and claimed his first win of the season at the Bootleg Racing League Dirt Street Stock 40 lap feature event at Lanier National Speedway ahead of his teammate William Hargreaves and Jim Reavis. “I came out into this race just hoping to have a good race”, Northcutt told us as he feels that he is finally coming out of a string of unfortunate luck that has been following his team this season.

Brandyn Proudfoot did not get on track in time to compete and that severely shook up the top 5 in the points standings. Northcutt moved up to 1st ahead of Proudfoot with a gap of 31 points. Hargreaves, who finished the race in 2nd place, moves up to 3rd in the points and closes the gap to the lead making the championship battle a three way battle. Jason Best moves up into 4th as Johnny Ratley dropped back as he didn’t run for the second week in a row, essentially taking himself out of the championship competition.

“I came in with pretty good confidence. I had a teammate behind me and a little bit of a lead stretched out there. [There] Wasn’t a ton of cautions, so I was able to just drive my race like it was an afternoon out on the road.”, Northcutt joked. “There [were] no lap cars to deal with, it was about the easiest drive you can hope for as a leader in a race.”