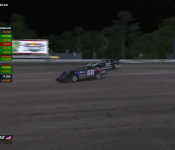 Blake Chapman of Vanderpool Racing won for the fourth time this season in the A&J Custom Creations 305 Sprints Series with the Coast 2 Coast Racing League Hometown Heroes Series 20 lap feature event around Volusia Speedway ahead of Brennon Lacy and Nick Vickrey with a GWC finish. “With these restarts we don’t have much room as a leader to dictate when we go since the green comes out pretty much as soon as the pace car pulls off”, Chapman shared with us about losing the gap he had built ahead of the field as the caution came out with only two laps to go. “I guess it makes for better racing”.

Randy Shreves of LGR Motorsports took the checkered flag tonight in the iCON Sim Sports 360 Sprints Series 25 lap feature beating out Patrick Spangler and Kyle Parker. Multiple cautions ended the evening early for several drivers, including Stephen Spies and Donovan Ross, as restarts caused mayhem in the tightly stacked field. Very much a start and stop race with many cautions halting the action, Shreves told us, “It definitely takes an effect on you. You just gotta hope that you get a good restart every time because if you mess up just once, there’s your race.”

Brad Vickrey of Spartan Racing absolutely dominated Volusia Speedway as he lead every lap to his second win of the season tonight in the Pro Late Model Series 30 lap feature ahead of Tader Williams and Stephen Spies. “I knew that I had my work cut out for me if I was going to try to stay out front”, Vickrey told us about holding off Williams and Spies for 30 laps. Vickrey is leading in the points standings and has his eyes on the championship. “I’ve been trying to get a pro late model championship out of Coast 2 Coast for like 3 years now… hopefully this is the year.”