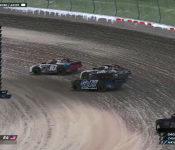 Jordan Gage with the Dirt Panda Racing Team took the checkered flag in his debut race for the season opener of the Bootleg Racing League Dirt Street Stock Series at Eldora Speedway beating out Cruise Caudell and Shaun Hayes. Gage controlled the field tonight with grace pulling away by almost an entire second at one point in the race. Gage is just one of an influx of new drivers to the series this season that shook up the usual field as many familiar names went home early after not making it to the feature event.

Brandyn Proudfoot and Billy Northcutt battled each other hard through the last season for Proudfoot to earn the championship title. This season is shaping up to be a very different story altogether as Proudfoot finished in 5th, behind William Hargreaves in 4th, after a fierce battle across the entire field tonight. Gage made a loud statement along with several other new drivers in the Bootleg Racing League that they are a force to be reckoned with. If Gage is the new driver to beat this season remains to be seen as we look toward Weedsport Speedway next weekend.

“If you weren’t up top, you know, banging on the cushion, you weren’t going anywhere”, Gage commented after his flag to flag victory. Staying focused on hitting his marks and running his line, Gage was able to hold the lead uncontested ahead of league favorites such as Northcutt, Proudfoot, and Hargreaves. “Just ran up there and if the slider ever came we were ready for it, but we seemed pretty untouched.”