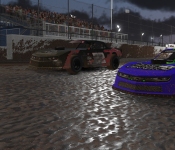 Brandyn Proudfoot of Jim Beaver eSports claimed his first win of the season tonight at Weedsport Speedway in the Bootleg Racing League Dirt Street Stock feature event ahead of William Hargreaves and Billy Northcutt. Proudfoot had to defend hard against Hargreaves and even lost the lead to him for a few laps midway through the feature as Hargreaves used lap traffic to his advantage. In an exciting last minute attempt, Proudfoot was able to regain the lead with only two laps to go and took home the checkered flag. Proudfoot seems to be off to more of an uncertain start in this season than what we’ve seen from him in previous seasons.

Jordan Gage, last week’s winner, started the night in 2nd place behind Proudfoot and was already challenging for the lead when technical issues took him out of the race going into the third turn on the first lap. That upset allowed Proudfoot to close up the gap in the point standings. Hargreaves now leads with 153 points, but Proudfoot is now trailing behind by only 2 points after tonight’s win. Northcutt is currently in 3rd with 131 points and Gage dropped back to 4th with 120 points.

“With the higher car counts, the track breakdowns, everything’s going to happen faster which means you have to figure it out quicker. If you start falling behind, you’re going to start dropping back quick even if you’re an experienced guy.”, Proudfoot talked with us about the challenges this season with the increased field size. “It’s all about getting your problem solving down, getting used to those tracks, learning the characteristics, and ultimately keeping up with that track breakdown.”