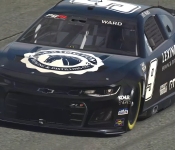 Jeff Ward with GRAAFix LC Motorsports claimed his 2nd win of the season tonight in a caution plagued night at the Circle Jerks: A Revival Motoring Podcast 150 with the Pretty Good Racing League at New Hampshire Motor Speedway ahead of Mike Rasimas and Vincent Crow. “We got destroyed last week at [Road Atlanta], had a DNF, but it helped us being able to start 2nd tonight.”, Ward claimed it was a deciding factor in tonight’s win, “That track position meant a lot and kept us out of trouble for the most part. It feels good to be in Victory Lane here.”

Norm Pelletier led the 27-car field to the green flag with Jeff Ward running to his outside. Pelletier cleared into the lead, but Ward wasted no time going after the lead off the start diving below Pelletier and taking away control of the field. The early stages of the race were chaotic with drivers throughout the field struggling to find grip on cold tires and several drivers found themselves sliding through the infield grass after losing the rear end of the car on corner entry. Eckrich was cautiously negotiating through traffic on his way to the front and was up 10 spots running in 17th place going into the 20th lap.

Pelletier held onto 2nd place as Thomas George moved up to battle Danny Gutierrez for 3rd. Unfortunately, contact between George and Gutierrez turned both cars around and collected Adam Jurski bringing out a caution on lap 36. Several drivers shuffled down pit road jumping Eckrich up to 4th place for the restart. Eckrich quickly maneuvered around Isaiah Dupre and Pelletier securing 2nd place and went to work closing the gap to Ward little by little with each lap. Ward and Eckrich ran away with the lead battle over 1 second ahead of Pelletier in 3rd with 45 laps completed.

Ward and Eckrich both came down pit road on lap 53 under caution and rejoined the track still on the front row with Ward still in control the field. Mike Rasimas was up into 4th off the restart overtaking Cody Erdmann from the outside line. Approaching the second half of the night, Rasimas was sent around after contact with Chance Manning bringing out another caution and allowing the drivers to try to stretch the fuel to the end. Ward and Eckrich both went down pit road and rejoined the field in 2nd and 3rd respectively behind Vincent Crow as the green flag came back out and racing resumed with 75 laps remaining.

A fumbled restart caused by an incident in the back half of the field brought the caution back out immediately causing a checkup that the field wasn’t expecting resulting in Eckrich being sent hard into the outside wall and falling far back in the running order and multiple laps down with serious right front damage. Racing again resumed on lap 80 and Ward was able to take the lead away from Crow with Erdmann following him into 2nd. Rasimas was back into the top 10 and consistently moving forward through traffic and Brian Yaczik was up to 6th behind Brown.

Another pit cycle under the caution on lap 103 shuffled the running order around with Ward rejoining in 3rd. Jonathan Cogswell as leading the field for the first time of the night with Pelletier in 2nd as racing resumed with 45 laps remaining. Ward showed his speed as he quickly dove beneath Pelletier into turn one off the restart and then Cogswell going into turn three taking back the race lead as they crossed the line after one lap green. Rasimas maneuvered his car up into 2nd place ahead of Erdmann while Crow and Brown battled side by side over 4th.

With 24 laps to go, Ward and Rasimas had extended the gap ahead of Erdmann in 3rd by over 1 second as the field started running more aggressively going for any positions, they could get with the laps quickly counting down. Ward was able to break away from Rasimas pulling the lead out by over 1.5 seconds going into the final 10 laps. Ward maintained his lead and took the checkered flag with Rasimas, Crow, Erdmann, and Rhyne rounding out the top 5 drivers at the line to bring the night to a close at New Hampshire.

Jeff Ward leads in the point standings the 7th week in a row with 308 points. Brian Yaczik holds onto 2nd place now 29 points behind the leader. Shane Parish sits in 3rd with 257 points, only 22 points behind Yaczik. Thomas George holds 4th place with 245 points and Vincent Crow moved up into 5th with 236 points. Next week, the drivers of the Pretty Good Racing League head over to Pennsylvania for the Steel Horse Live 69 Nice at Pocono Raceway on July 26th with all of the intense action broadcast live at 8:50PM ET exclusively on the Virtual Grip Network!