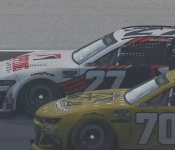 Drew Carroll with Loud Pedal Motorsports took the checkered flag by 0.003 in a drag race to the line tonight in the We Got a Partial Track Update; It Only Took 84 Years 100 at Indianapolis Motor Speedway with the Pretty Good Racing League ahead of Scott Eckrich and Jeff Ward. “I was driving the race of my life right there”, Carroll commented as the night came to a close, “I feel like we’ve been running really, really solid, and we just haven’t had the finishes to show for it… We just had some luck tonight”

Adam Jurski was in control of the 23-car field as the green flag came out with James Krahula alongside him on the front row. Jurski launched far out in front of the rest of the pack going to the first turn while several drivers were caught up in an incident off the start that Scott Eckrich was able to avoid altogether bypassing half of the field and moving up to 11th place. Jeff Ward also survived the green flag collisions and was inside of the top 10 as the field started to single file out around the course.

5 laps into the night, Jurski maintained the lead and had stretch out over 3 seconds ahead of Drew Carroll as Eckrich had maneuvered up to 6th and was closing in on Brian Yaczik ahead of him. Ward overshot a corner on a previous lap and was running in 8th behind Mike Rasimas. Carroll was closing the distance to Jurski after putting down the fastest laps on track for 2 laps in a row and was within 1 second of the leader with 8 laps completed. As the first quarter of the race was behind them, a lot of the expected names were making their way into the top 10.

Carroll had closed up on Jurski’s bumper and was aggressively looking for an opportunity to take the lead away but struggled to find the drive off speed coming out of the corners to beat Jurski into the next corner. Eckrich had made up 2 seconds on the leaders from 5th place as the lead battle continued and Jurski had reached the first signs of lap traffic on lap 13. Jurski was forced to checkup for a lap car and that gave Carroll the opportunity to get alongside the leader and Carroll was able to clear ahead of Jurski going into turn one.

Carroll started pulling away from Jurski while Eckrich was up to 4th place and continued to close the gap. Ward was up into 7th place behind Rasimas and Yaczik. In the second half of the night, with 21 laps remaining, Eckrich was the first driver to go down pit road after climbing up to 2nd place and within 3 seconds of the leader. Eckrich rejoined in 11th, but several drivers opted to run their pit cycles on the following lap to include the leader, Carroll. As Carroll rejoined the track in 7th, Eckrich was only a few car lengths behind him.

As the last of the drivers completed their pit stops, Carroll had regained control of the field with Eckrich running close on his rear bumper with 18 laps to go. As the laps counted down, Eckrich made many failed pass attempts for the lead but wasn’t able to complete the move around Carroll going into the final 10 laps. As the white flag came out, Eckrich started pushing much more aggressively for the lead but wasn’t able to make the pass and Drew Carroll crossed the line 0.003 ahead of Scott Eckrich in a drag race to the checkered flag with Jeff Ward, Brian Yaczik and Adam Jurski rounding out the top 5 finishers tonight at Indianapolis Motor Speedway.

Jeff Ward leads in the point standings the 9th week in a row with 370 points. Brian Yaczik holds onto 2nd place now 50 points behind the leader. Drew Carroll moves up three spots into 3rd with 316 points after tonight’s win, only 4 points behind Yaczik. Thomas George fell back to 4th place with 300 points and Shane Parish holds onto 5th with 299 points. Next week, the drivers of the Pretty Good Racing League head up to Michigan for the “Yaz’s Sandwiches & More 200” at Michigan International Speedway on August 9th with all of the intense action broadcast live at 8:50PM ET exclusively on the Virtual Grip Network!