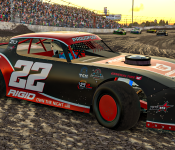 Brandyn Proudfoot with Jim Beaver eSports claimed his 5th win of the season tonight with the Bootleg Racing League Dirt Street Stock Series at Kokomo Speedway ahead of Zachary Loomis and J R Shepherd. “It’s definitely a momentum boost and a little bit of a confidence boost too.”, Proudfoot commented after dominating the track tonight, “The multi-lane track condition made it interesting. At the beginning of the race, I honestly wasn’t sure if I made the right choice, but I just tried to stick it out and see what happened and luck was in my favor tonight

Brandyn Proudfoot put down the fastest lap at the top of the evening with a 14.838 during qualifying and beat out J R Shepherd for the first heat race win securing the pole position for the feature event. Zachary Loomis took the second heat and started alongside Proudfoot on the front row. William Hargreaves won the third and final heat of the night and started 3rd in the feature. Proudfoot led the field around turn four and had a strong launch out ahead of the field as the green flag came out over Kokomo Speedway.

Proudfoot ran a very high line around the track while Loomis was committing to the inside trying to match Proudfoot’s pace. Shepherd and Billy Northcutt battled side by side over 3rd place with Hargreaves waiting behind for an opening to take advantage of. Proudfoot maintained control of the field ahead of Loomis as the drivers put the first 10 laps behind them as Northcutt started to fall back to 6th behind Jason Menda. Shepherd started look to the outside of Loomis looking to take away 2nd place with Menda following him along the wall.

Hargreaves found himself stranded to the inside and struggled to get ahead of Shepherd, but Loomis moved up to the high side and closing any gap Hargreaves could’ve moved up into. Menda tried to get his nose beneath Shepherd and, with Hargreaves still running low, he caused a three wide battle over 3rd before Menda was forced to fall back and Hargreaves cleared ahead of him on the high side for 4th. Proudfoot had stretched his lead out to over 1.5 seconds ahead of Loomis and was catching the first signs of lap traffic with 15 laps remaining.

Loomis continued to push down low, but Shepherd stayed within a few car lengths keeping the pressure up from the high side with Hargreaves and Menda running very close behind. Going into the final 5 laps, Proudfoot had extended his lead out to 2.5 seconds as he cautiously negotiated through the rear of the field. Proudfoot maintained his pace all the way to the checkered flag with Zachary Loomis, J R Shepherd, William Hargreaves and Jason Menda rounding out the top 5 finishers tonight in the Bootleg Racing League Dirt Street Stock Series at Kokomo Speedway.

Brandyn Proudfoot is running away with the lead in the point standings with 539 points as the season championship begins to look like a shutout. William Hargreaves holds onto 2nd place with 469 points with Billy Northcutt close behind in 3rd with 455 points. J R Shepherd moved up into 4th place with 405 points as Jeffrey Hardin slid back to 5th with 400 points. The drivers of the Bootleg Racing League Dirt Street Stock Series now set their sights toward Lanier National Speedway for race 8 of season 12 on August 12th with all of the dirt slinging action broadcast live at 7:10PM ET exclusively on the Virtual Grip Network!